240FLM
From the outset, it was decided that the appliance would be fully stowed, as near as possible, to its original specification. Group member, Pete Weight agreed to act as inventory and stores officer, this title has now become "Quartermaster". Pete has spent 2 years pursuing all the items that are needed  with great success but the hunt continues!
​
When 240FLM arrived at Wicken in October 2014, almost no operational equipment was on board, it did arrive with a "hand winding lever" for the jacks, the "Fly Ladder" TL Stirrup and a rather odd length of manilla line, as well as a whole assortment of non Fire Brigade related artefacts and the odd cobweb or two!

The task of restowing her was therefore likely to be challenging at best. However, as is the way with firemen, a simple word of mouth event leads to an initial offer of an original Hook Ladder, which was of course quickly accepted, and the job was off and running.
Over the following 12 months, equipment needed started to arrive from all over the world, this included a "Hook ladder belt", an original Turntable ladder hook belt, CTC extinguisher, Hydraulic pump lever, pressure relief valve, a fulls set of manuals.

Equally obvious was that with so much equipment flooding in, someone needed to take responsibility for it and as usual, a volunteer stepped forward. Pete Weight, ex G Division, agreed to take on the role of Quatermaster and continues to hunt the country for related items that could accompany 240FLM as she moves from a restoration project to a show vehicle.

It also soon became clear that with so much equipment to gather together, it would make sense to try and equip the appliance with the 2 distinctive types of fire gear that would have been worn by the crews during its 17 year service. Therefore, running parallel to the equipment search, a broad appeal was issued via many channels for any original fire gear, and personal equipment such as axes, belts etc.

The response was overwhelming and within 18 months, everything needed was donated by retired firemen,friends of the group, or, purchased at sensible prices via the internet, exhibitions, auctions and fire related shows. Obviously, with most of this equipment being at least 35 years old, much of it is in need of restoration, with some items in particular appearing at first to be unusable. But we are a resilient and creative group and between us we have managed to resolve all the major restoration challenges.

​Follow the story below to see how we have progressed

The uniforms and personal equipment that we used during the period 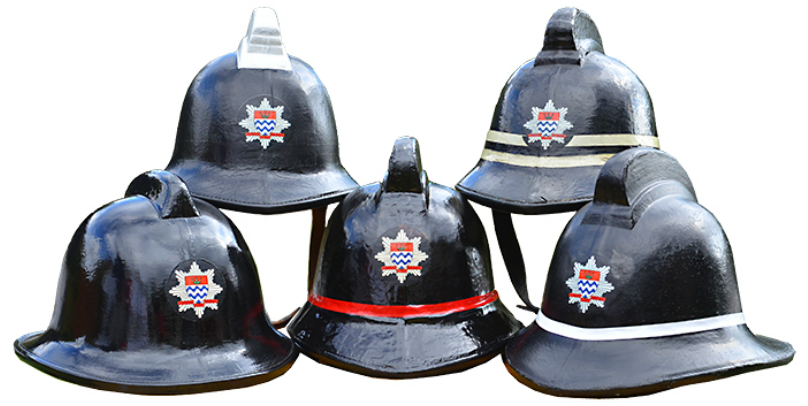 The helmet with the red tape ( Leading Fireman) shown in the middle was the precurser to the later white tape as seen on the right. This transition occurred during the late 1960's and was in place by 1970 for all ranks up to Station Officer. Station Officers went over to white helmets with black tape at the same time.
​
NB: All of the helmets have been donated by group members or retired fireman who are keen to support this project. 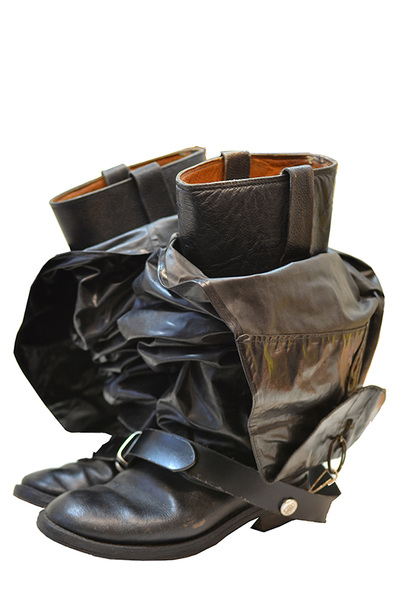 The classic 2 part, black leggings and leather boots as worn from the late 1930's right up to the mid 70's, notorious for providing absolutely no protection whatsoever! 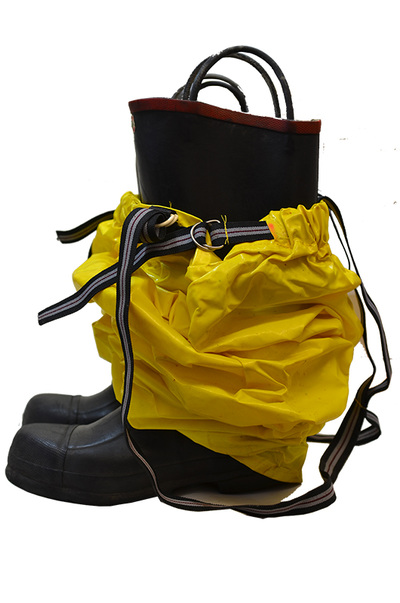 The replacement mid 1970's one piece yellow leggings at least provided waterproofing but little else in the way of protection. However, they were easy to put on and stayed in place when working. The replacemnt boots were Uniroyal rubber wellingtons, complete with steel toe caps. Again, although not as comfortable as the earlier leather ones, they did again mean that feet stayed dry nd toes stayed attached! 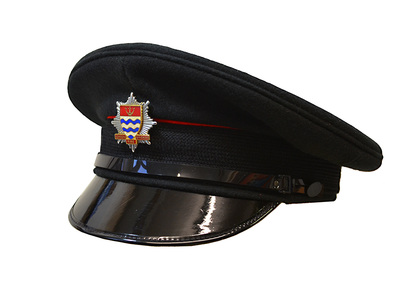 The traditional junior ranks peaked cap, black with a thin red cord and gloss peak, This was worn by all ranks up to and including Sub Officer.
On board 240FLM. 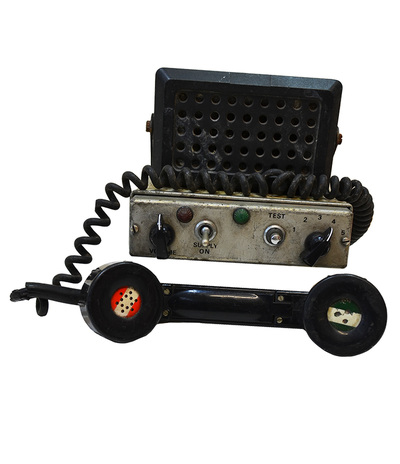 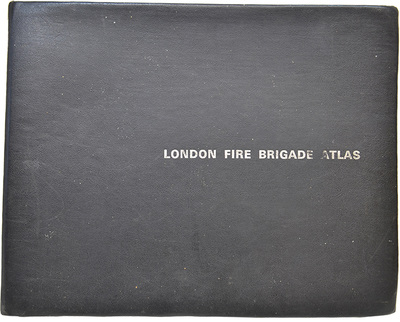 The appliance " Nominal Roll Board". (on the left) A vital item that recorded who was on board the appliance at any given time. This was supposed to ensure that in the event of an emergency involving the crew, a rapid check could be carried out to establish if anybody was missing. In the centre, the appliance radio pack, how much history has been spoken through this handset!. this particular unit has been  kindly donated by Paul Wood and will be fully restored. On the right, the traditional method of getting from A to B when away from the station and a call was received, the GLC Atlas. A3 in size, it was the original " Sat Nav" of the day. Courtesy of Ted Temple. 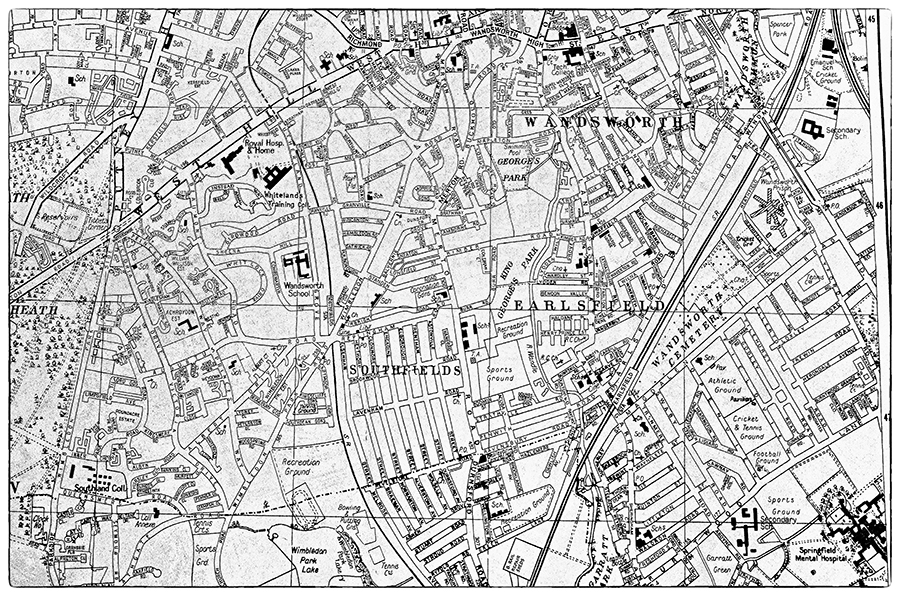 One of the K22 Wandsworth fireground pages from a GLC LFB Atlas. 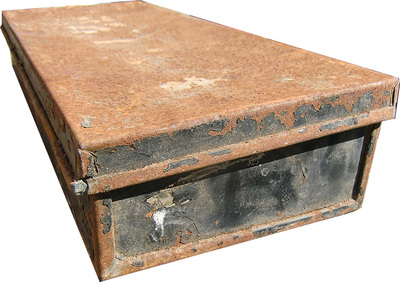 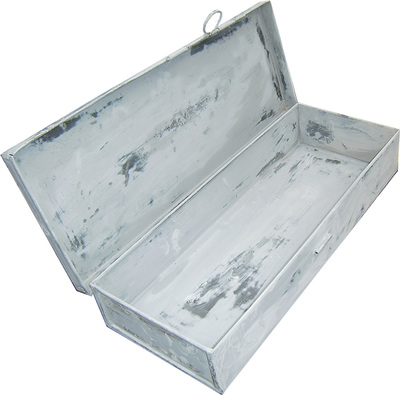 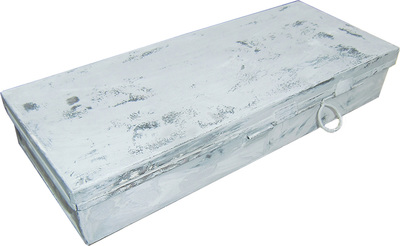 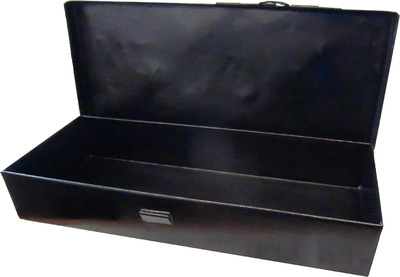 One of the hardest items to source was always going to be an original " High Voltage-electrical gloves tin.However, as is the way, whilst visiting the Odiham Fire show in August 2016, an original tin, formally belonging to B27 Deptford, was found under a junk stall and purchased for the princely sum of £5. A few hours hard work and some metal paint and it is now as good as new.Strange to think that this tin was on an appliance 40 + years ago less than 2 miles from where 240FLM was stationed.

The standard issue LCC " Hand Control Branch" was the only practicable way for personnel to hand deliver a jet or spray of water onto a fire. 1 each of these was issued to the Turntable Ladder fleet and was stored in the nearside foot locker. It was a heavy cast brass and gunmetal unit but gave excellent long term service before being replaced by the lighter construction AWG branch. This particular unit was generously donated by Eric Billingham.

The 2 most basic  extinguishers, 2 gallon Water stored pressure and Chemical Foam,  both to be carried in the back cab,and in the front was carried the CTC ( Carbontetrachloride) pump action chemical extinguisher for small fires in vehicle electrical systems. 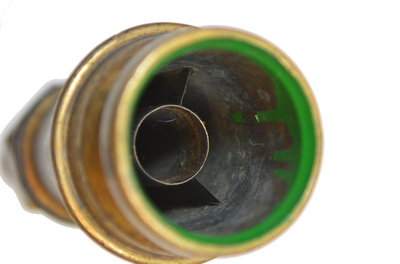 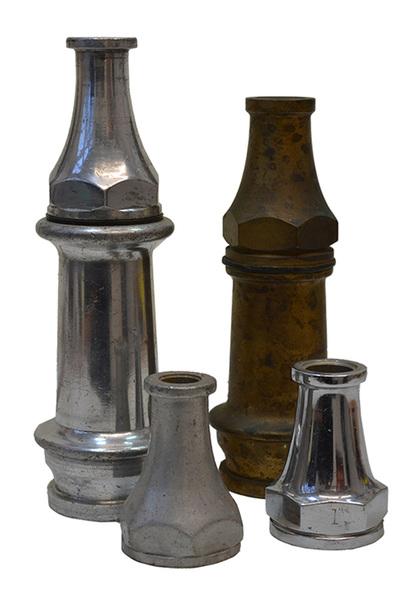 Apart from being a rescue appliance, the other main function was to provide a high level, high volume water attack on a major fire. To do that, the appliance was originally equipped with a " Streamflow" brass A Type branch and selection of nozzle sizes. The "Streamflow" consisted of an additional inner tube which constricted and compressed the water flow and in turn this produced an increased velocity . later on, these brass versions were replaced with the chromed aluminium type and had a range of 5 different size nozzles. We currently still require 1 more and a nozzle spanner. 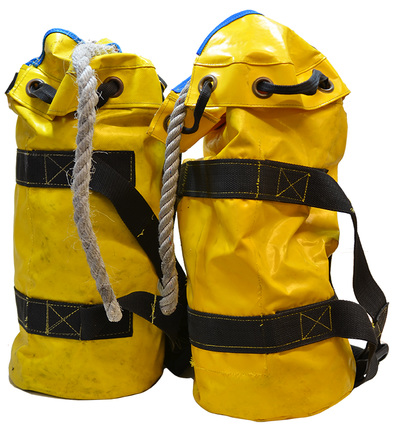 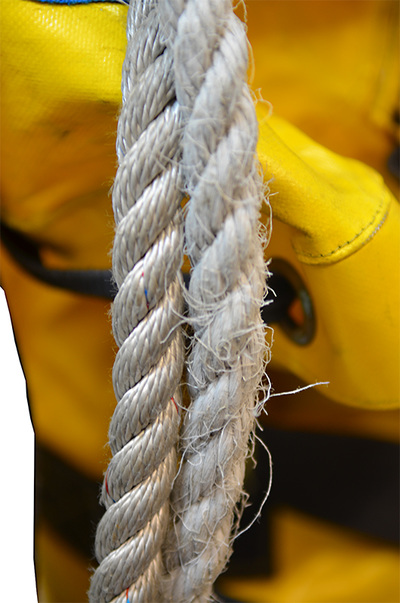 A close up of the two types of lines, Hemp on the left and " untanned "Manilla on the right. The manilla is a much softer and more pliable line to work with.
A 50 feet, general purpose long line and a 100 feet general purpose long line, both in their dedicated carry bags complete with shoulder straps for carrying aloft. These lines were historically made from either hemp or untanned manilla yarn which had been cut out of previously used lines which had become unserviceable. Originally, these lines would have been in green canvas bags but we are at this stage unable to find any. we are grateful to a senior group member for donating these. 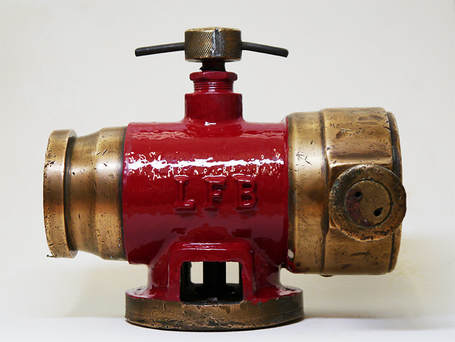 A " pressure relief valve" ( shown above) stowed in the rear hose locker, was brought into use when the appliance was used as a water tower. The device, manually operated, was always located as close to the base of the ladder as possible and was used to drain water down from the extended ladder before the equipment was made up and the ladder housed.